Now this is a first for Aidex! One of our suppliers of educational technology, Desktop Metal, was recognized by a leading national magazine as one of the year’s best innovations in engineering. In mid-October, Popular Science wrote this about Desktop Metal’s metal 3D printing Production System: 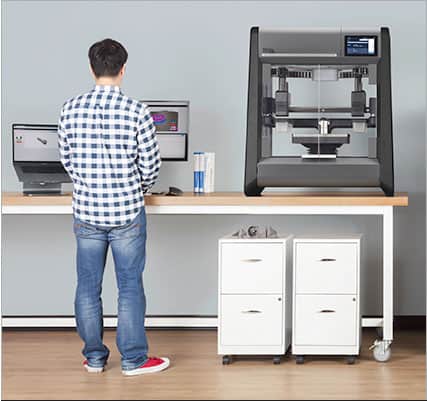 And big-ticket. Now companies can forgo the seven-figure monster machines for something smaller and faster. This new six-figure production system from Desktop Metal uses an inkjet-like technology to turn powder and a binding agent into whatever cold, hard widget you might desire—up to 100 times faster than the laser methods used in current systems.”

Popular Science pointed out exactly what we like about Desktop Metal’s metal 3D printing systems: they’re affordable. Instead of paying over seven figures for a sophisticated metal prototyping/manufacturing system, universities and technical colleges can get the latest in metal 3D printing for a low six-figure price. This will enable more students to use technology that will not only transform learning, but also the design and manufacture of metal parts. 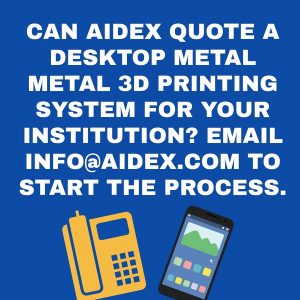 We also like the fact that Desktop Metal’s metal 3D printing systems are fast. Their Production System is the first metal 3D printing system for mass production of complex metal parts that is up to 100 times faster than current laser systems. Arriving in 2018, the Production System delivers the speed, quality, and cost-per-part needed to compete with traditional manufacturing processes. The Production System builds metal parts in a matter of minutes instead of hours. Leveraging low-cost Metal Injection Molding (MIM) powder, it is designed to deliver high throughput and per-part costs that are competitive with traditional manufacturing processes—up to 20x times lower than today’s laser-based additive manufacturing systems.

Aidex is the exclusive sales representative for Desktop Metal’s Studio System™ in Illinois, Indiana, Iowa, Kansas, Missouri, and Nebraska. The Studio System is ideally suited for educational environments as it does not require a special facility—just access to the Internet and electricity—and poses no safety hazards. The office-friendly Studio System is up to 10 times less expensive than existing technology.

We’re currently in the process of introducing (and quoting) Desktop Metal’s 3D metal printing systems to universities and technical colleges across the Midwest. Delivery of the award-winning systems is slated for early 2018. Contact us now for more information or for a quote.